One of the central elements of Haibane Renmei is the Laser-Guided Amnesia that wipes the identity of each Charcoal Feather.  The only clues are those onscreen from their cocoon dreams, their names, and their behaviour.  This post is my speculations [1] about the past of each Haibane.

Given the onscreen clues that do get presented there will be mentions of triggering events including suicide and abuse.

There are almost no clues to Nemu’s past in the series.  So this speculation has even less justification than most: the cocoon dream of sleeping represented what Nemu wanted rather than what she was.

I also think that being mentored by the gentle, loving, Kuramori was not an accident, and that age of emergence from the cocoon does not necessarily equal age of entry into the cocoon.

Finally Nemu is deliberately deferring her own Day of Flight until after Reki’s issues are resolved.

I see Nemu as a person who was so focussed on work or other aspects of life that Nemu forgot to rest, and forgot to look out for the people around her.

Thus she needed to rest, and needed to become a better friend. 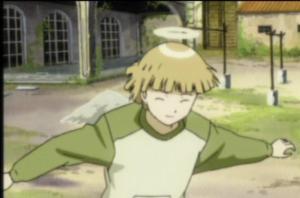 Now that I think about it in those terms, Kuu’s dream also represents a desire who she wants to be as opposed to who she was.

I see Kuu as someone weighted down by the expectations of others, always forced into being something, or someone, that she wasn’t.

The dream of floating in air represents a desire for the freedom to just be herself.

Although the process of becoming a Haibane stripped her identity, it did not strip the ingrained responses to this pressure to conform.  So even when there was no such pressure [2] Kuu attempted to copy the others by riding Reki’s scooter, wearing Hikari’s glasses, and buying too-large clothes.

In the gentle environment of Old Home these minor disasters were accepted with no more than amusement, and Kuu was able to find her own way. Becoming a mentor to Rakka was simply the final piece in the puzzle of Kuu’s self acceptance. 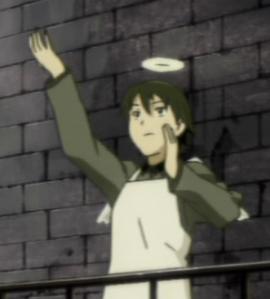 Kana is very hard to write about.  The biggest clue is in her apprenticeship to the watchmaker: I think that this reveals a desire to achieve something concrete, something lasting, by her own efforts.

In the opening credits Kana is the only Haibane seen working [3].

So Kana may have been someone who failed at something important, and is seeking to prove her abilities to herself.

I don’t know how (or if) this ties into the dream of being a fish swimming in a river, unless there was a sense of frustration at swimming upriver and never getting anywhere.  However this was never mentioned in the series so I’m drawing a very long bow here. 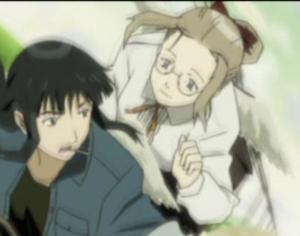 If Kana was hard, Hikari is next to impossible.  Relentlessly cheerful, occasionally a touch awkward, always wanting to help, Hikari is nevertheless very hard to get a read on why she might be a Haibane.  Guessing who she used to be is further than I’m really prepared to go.

When I was taking screen captures for this post from the opening credits I discovered that there are no good solo shots of Hikari – she is only seen as part of the group in the credits. This does make me wonder if Hikari was a last minute addition.

As with all the Haibane I’d like to hear what other people think on this: am I missing something obvious?

Rakka in her Cocoon

Contrary to speculations I’ve seen elsewhere, and despite the screenshot in Scar – Illness – Arrival of Winter, I don’t think that Rakka committed suicide in her previous life.

I do think that Rakka was a victim of a wasting disease, cancer perhaps, and shut out those who cared for her.

This means that the crow in the dream was someone trying to hold her to life that Rakka turned away from, thinking she was alone, that no one would care if she disappeared.

Initially Rakka still could not accept that someone had cared, or would care, and was thus unable to remember that aspect of her dream.

This is why the forgiveness of the Crow is essential both to Rakka breaking out of the Circle of Sin, and to Rakka becoming the “Involved Nut” [4] that cares deeply enough to help others.

Kuu’s Day of Flight was necessary for Rakka to learn this painful lesson.

Rakka cared for Kuu, and felt abandoned when she left: this was necessary for Rakka to understand the grief of those that Rakka left behind.

It is important that Rakka’s self harm is worst when she feels most abandoned, and also that it is healed when Rakka accepts forgiveness.

At this stage the full details of Reki’s dream have yet to be revealed so this will spoil the coming episodes.

Once the details do come out it is fairly clear that Reki either committed suicide by walking on a train track, or was murdered [5].  Either way I suspect that Reki was a victim of significant abuse before that happened.

Reki’s deep seated fear of abandonment, her sense of always being isolated, speak to abuse that cut deep into her soul. Whilst Kuramori may have managed to fix some of the damage, Kuramori’s Day of Flight [6] would only have reinforced the basic position.  Nemu’s initially fearful reaction to Reki wouldn’t have helped either.

Even worse are the times that Reki believes that she deserves to suffer. This is the victim blaming the victim, and is hard to watch when the final episodes truly confront it.  This mindset sometimes prevents Reki from hearing, or feeling, the respect and love that the other Haibane [7] hold for her.

It is part of what traps Reki in the Circle of Sin, and also gave rise to her own self harm early in the series.  Arguably Reki’s smoking is a more subtle version of the self harm, and Midori from Abandoned Factory has called Reki on it.

The Haibane are souls with unfinished business, but mostly this business isn’t an all consuming darkness.  Reki’s past is the darkest with Rakka’s second.  Most of the Haibane have relatively simple issues [8] to deal with when compared to Reki or Rakka that are addressed with time and the acceptance of Old Home.

Given the wildly speculative nature of this post I’m more than happy to discuss, so leave a comment and we’ll get started.

[2] Beyond the limited rules of the Charcoal Feathers: used goods, working in town at something, etc.

[4] I’ll explain that in a later post.  Short version: there are multiple ways to write the same sound in kanji, and the different ways have different meanings.

[5] Given the extent to which Reki is an unreliable narrator to Reki, I think that there is room for doubt here.

[6] Kuu’s Day of Flight wouldn’t have helped either.

[7] I think that The Communicator also respects Reki, but the nature of their dealings make it impossible for Reki to see that.

[8] Granted that Hyohko’s “Ice Lake” has ominous overtones but he isn’t a main character, and I don’t have enough information to even make a guess there.

2 thoughts on “Twenty Days of Haibane Renmei – Day 15: Who Were They Before They Were Haibane?”