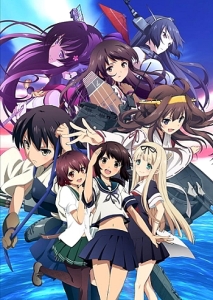 A little while ago I wrote about how the tight focus on Fubuki helped Kantai Collection (2015, aka KanColle) succeed as a series. I certainly don’t have any issues with the KanColle we got – Fubuki-chan is a more than acceptable lead, and the series stands up well to rewatching.

However KanColle could have been a very different show. Episode 6 Destroyer Division 6 and the Battle of the Curry Seas! feels like the pilot for that other show.

K-On is in many ways the show that kicked off the huge boom in “Cute Girls Doing Cute Things” trend in anime, and one that hasn’t really gone away since (looks pointedly at Asteroid in Love).

For which purpose DesDiv 6 would have been ideal. Even with the limited screentime they get in rest of the KanColle that was actually made, you can see the potential for K-On inspired hi-jinks.

Akatsuki’s desire to be an elephant, er, elegant lady.

Ikazuchi wanting to be the one that her sisters rely on.

Hibiki as the deadpan snarker with hidden depths.

As a group they’re given full flight in episode 6, and they really do prove that they can carry a series. Episode 6 is essentially a cooking competition among the kanmusu for the best curry on base. Hilarity and hijinks ensue.

Noting that, for the most part, such a version of KanColle would be a comedy without an overarching story, or Fubuki’s strong character arc.

For the most part.

There’s at least a couple of serious episodes buried in DesDiv 6 that good writers could do a lot with. And we know that KanColle had good enough writers to pull it off.

Things Which the Girl Saw

Things Which the Girl Saw (which I’ve occasionally seen translated as What the Girl Saw) is a fabulous doujinshi about Ikazuchi in Surabaya Sea in 1942. The conceit of the doujinshi is that Ikazuchi is present as an invisible ghost watching the actions of her Captain Shunsaku Kudou and crew.

Specifically the rescue of the survivors of the HMS Exeter and HMS Encounter.

How would watching such events affect the spirit of the girl?

I’ve linked to the doujinshi above, and I do recommend that you read it. You’ll have to click/tap on each voice balloon to reveal the English translation.

But with that as background, now imagine an episode or two of KanColle where Exeter and Encounter show up as kanmusu… and want to thank Ikazuchi for her Captain’s actions.

This is a video I’ve seen a couple of times that more or less summarises the actions and fate of the IJN in World War II as if they’d been KanMusu all along.

Hibiki survived to be handed over to the Russians as reparations: her sisters didn’t.

Beyond the gratuitous Russian (“Khorosho”) that pops up in her dialogue, there’s elements of this already in Hibiki’s characterisation. I think it’s why she’s the quiet one of the group, why her hair colour is silver/white.

But actually drawing out the survivor’s guilt elements could have given us a powerful episode or two.

I’m not immediately aware of any particularly dramatic episodes that could be built around Akatsuki and Inazuma, although the video above does suggest possible trauma for Akatsuki should she be called upon to use searchlights.

Then again I haven’t done a lot of research in this area, whereas there’s plenty of evidence that the KanColle game and anime writers have. So these two could very well have their own Day in the Limelight episodes in this sort of series.

All of the above is pretty much idle speculation on my part based on one episode and a bunch of fan works I’ve seen that focus on DesDiv 6. That said, I think it’s a version of KanColle I’d like to see one day as an addition to what we already have.

glad to be of service! pic.twitter.com/R2v5wMVC1G

Question of the Post: What are your thoughts on such a version of KanColle? If you had to choose between the version we got and this, which would it be?