Holmes of Kyoto, The Case Files of Jeweler Richard 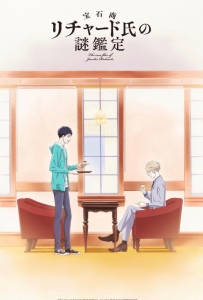 On first glance The Case Files of Jeweler Richard looks like the adult, and Yaoi, version of Holmes of Kyoto (which I mostly enjoyed but never got round to reviewing).

That said, I think the character dynamics between Seigi and Richard are starting on a healthier basis than Aoi and Kiyotaka.

In a fairly blatant, and thoroughly lampshaded, case of Meaningful Names, Seigi means “justice”. He rescues Richard from some thugs, discovers that he appraises jewels, and approaches him to value a ring that his grandmother stole decades ago as a pickpocket.

True to his name, Seigi’s motive is to return the ring to the rightful owners. This surprises, and impresses, Richard enough that he ends up offering Seigi a part time job. This, along with the sense that Richard is the ultimate appraiser, is where I see a lot of the similarities to Holmes of Kyoto.

The resolution to the story of the ring that Seigi is trying to return is clever enough, with some pointed enough social commentary on the status of women in Japan, that I won’t spoil it.

Overall I’m impressed enough with The Case Files of Jeweler Richard to keep watching it for at least a couple more episodes.