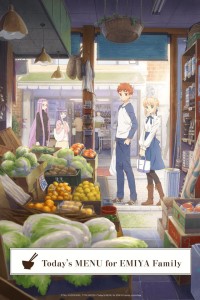 Today’s Menu for the Emiya Family[1] is an oddly[2], well, fluffy entry to the Type Moon Verse that released one episode a month from January 2018 to January 2019.

I still haven’t forgiven the makers for stopping, especially since it was the show that got me started on the Fate/Stay Night franchise in the first place. So take that as a warning: this show is so endearing that it may be a gateway anime to Fate/Stay Night[3].

To set the scene, here’s the OP:

The setup, as far as I can tell, is a Holy Grail War that either never happened or that ended remarkably peacefully with both Servants and Masters settling down to daily lives in Fuyuki City. For example Rider and Lancer seem to have part time jobs.

In the midst of this, Shirou (and sometimes the other characters) cook. And then they enjoy the food, usually with a hilarious not quite Super Deformed art style. Most of the female characters, Saber especially, are surrounded by flower special effects when the food makes them happy[4]. 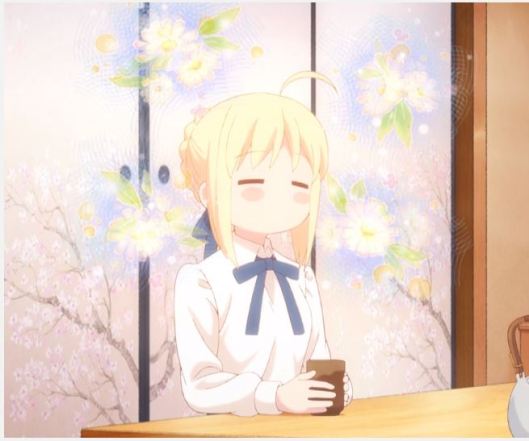 The other funny part with Saber is her Ahoge which seems to act like a Shirou seeking radar in Emiya Gohan.

The Servants clearly still have their powers, which makes for an… interesting beach volleyball game in episode 7 Refreshing and Easy to Eat Chilled Ochazuke. It also means that Rider’s powers to control any vehicle come in handy in episode 12 One-pan Roast Beef.

All that said, it must be noted that the warm and fluffy treatment for at least two, and arguably three, characters is a definite worry in Emiya Gohan. The relatively positive treatment of Shinji has drawn a fair amount of attention – I strongly recommend reading this article on Anime Feminist for a nuanced take on this – but there are others that need to be looked at.

First up is Caster who was effectively a mass murderer in the Fate/Stay Night franchise. Unable to draw sufficient mana from Souichiro, she instead drained mana from hundreds of innocent bystanders. In Emiya Gohan… Medea in episode 9 Taste of Autumn – Caster’s Training in Japanese Dish Cooking is a cute elf housewife, albeit with some socialisation issues[5].

The final, and debateable, case is Rider who may have been ordered to harm innocents and would not have done so without command seals being used[6].

On the bright side there’s no sign of the Golden Prick or the Priest so we can imagine them either to have been squashed, or subsisting on cheap takeaways in endless jealousy of the Emiya family. That would please me greatly. 🙂

As a further bright side, even with those caveats, Emiya Gohan really is a charming show that I can apparently rewatch more or less endlessly. I’ve been having some intense periods at work recently and having something short like Emiya Gohan at 12-13 minutes of fluff to relax to is just wonderful.

There’s also a gentle sense of, well, sentimentality running through the show, of the pleasure in food being as much pleasure in the company whilst eating the food. A point that’s made explicitly in episode 13 Hot, Hot, Hot Pot in case you missed it in the tone of the rather sweet ED:

Overall Emiya Gohan is one of my favourite comfort shows right now, and one I’m likely to come back to again and again. Highly recommended.

[2] Although by all I’ve seen it is far from the oddest entry in the Type Moon verse, at least judging by Super Affection, the OP to Carnival Phantasm (which I haven’t seen and I’m not sure if I’m game to).

[4] The single funniest example however was Caster who was so ecstatic at learning to cook a delicious meal for her Souichiro-Sama that her flowers pushed Saber’s head to one side.

[5] The way (and where) she asks Shirou for cooking lessons is hilarious. Mind you her chain of logic leading to Shirou as the best candidate is impeccable.

[6] See commentary on Shinji above.