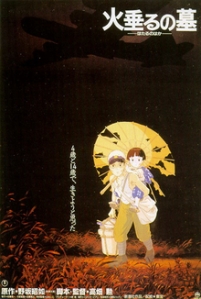 The charming tale of a boy and his sister starving to death, as narrated by his ghost.

There really is no way to characterise Grave of the Fireflies[1] except as unremittingly bleak. Whilst there are moments of beauty, even joy, as Seita and his sister Setsuko live the last of their lives in the dying days of World War II, there is always the reminder that this ends badly.

That many of the beautiful moments are bound up in the oh-so-ephemeral fireflies only drives the point home.

Based on the short story of the same name by Akiyuki Nosaka (1930 – 2015), Grave was (as per Wikipedia) written in a time of economic growth that felt strange to the author. The story is semi-autobiographical and the author said that the death of his sister was “an exact match with the novel.”[2] This goes a fair way to explaining the final scene of the movie which has the ghosts of Seita and Setsuko sitting on a bench looking over a modern city in Japan.

Despite the subject matter Isao Takahata (1935 – 2018) [3] repeatedly denied that Grave was an anti-war film, seeing it as more about the lives abandoned due to being distanced from society. That said, I do think it is worth noting that the anime of the 1980s did tend to be more consistently anti-war than is currently the case. From the Gall Force franchise, to Mobile Suit Gundam, to Windaria to even Dirty Pair, there was a lot of anime in this period that called out the insanity of war. So whilst Grave may not be anti-war per se, it can easily be read as such when taken in context with its contemporaneous peers.

In terms of director Isao Takahata’scareer whilst Grave was his first film for Studio Ghibli as director[4], it was his seventh film overall as director, and fourth as writer. It is, as a result, a very assured film: Grave knows exactly the story that it wants to tell, and tells it well.

However, this isn’t the first time I’ve seen Grave and by this stage I was more enduring it than appreciating it[5]. To be honest I doubt I’m ever likely to want to see it again.

I do highly recommend Grave to those who haven’t seen it; it is a master work from the late Isao Takahata.

However I don’t recommend seeing it twice. Here’s the current Madman Entertainment trailer:

[2] Wikipedia credits this to an Animerica interview with Isao Takahata and Akiyuki Nosaka in 1991.

[4] He was the producer for Laputa: Castle in the Sky.

[5] I’m doing a Studio Ghibli panel at GammaCon and this rewatch is part of the preparation for that.