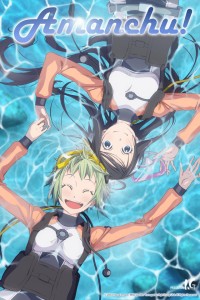 I was so looking forward to the second season of Amanchu!

As I wrote about the first season, there was real potential for this show to become an all-time favourite if it was given the space to breathe. Even with the limitation to 1 cour again, the early episodes showed potential with an early focus on Teko obtaining an advanced diving license that would allow her to dive deeper than 18 meters with Pikari.

Then it all went wrong.

Whilst I’d look pretty silly objecting to the supernatural or fantasy elements in anime generally[1], there is a specific class of show or story where I do object. These are the shows where the supernatural adds no value to the story, or really doesn’t fit in with it.

Amanchu!, particularly with the practical emphasis on real-world diving safety[2], was to me the latter type.

So having about 1/3 to ½ of the season feature supernatural elements[3] was a real disappointment. Especially as the time spent on these episodes wasn’t spent on watching Teko study and practice for that advanced license.

Where’d the guy come from?

For all that Kozue Amano is really good at writing Romantic Two-Girl Friendships, she’s really bad at letting anything develop from them. Hence Alicia disappearing into a marriage with a character that was never introduced on-screen in ARIA.

Ditto the derail in this season of Amanchu!

Speaking solely for me, it’s a real shame because I was really liking the interactions between Teko and Pikari.

On a wider level, this is why marginalised groups cling to what little representation they do get: because all too often it will be subverted or taken away. Which is what Amanchu! just did.

That has to hurt, it’s why you see so much excitement when decent representation does happen. It’s not just the joy, it’s the temporary relief from the pain as well.

The finale of Amanchu! Advance returned to Teko completing her tests for the advanced license.

Because we didn’t have the foundation of Teko working for this throughout the season, it didn’t feel like the show had earned it.

Overall I enjoyed the individual episodes of Amanchu! Advance, I even enjoyed (to an extent) the dreamworld sequence of episode. I just didn’t appreciate the season as a whole, and really can’t recommend it. At this stage any rewatches for me will end with the first season and OAV.

Here’s the quite pretty OP:

[2] In the first season Teko essentially gets a lecture on how the bends happen, and there’s another safety incident early in season 2.

[3] Including a dream world, and massive shout-outs to ARIA in the form of Cait Sith.