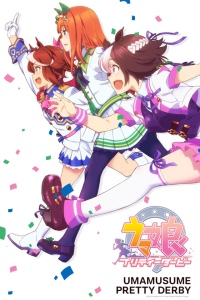 The Spring 2018 season is upon us and the first less than inspiring premiere is Umamusume: Pretty Derby, which is basically built around the Moe Anthropomorphisms of racing horses. Complete with gender flipping (the original Special Week was a stallion).

There is, according to the prologue, an awareness that the Horse Girls are reincarnations of horses from another world. This presumably explains their names, although how they know what horses they’re the reincarnations of isn’t explained.

Like other shows of this sort (cf: KanColle) there are all sorts of historical references. e.g. As with the real Special Week, the main character’s mother died giving birth and she was raised by a human mother.

Special Week was also raised in the back blocks of Hokkaido without any contact at all with any other Horse Girls, and arrives as the complete combination of the Country Mouse and the Naive Newcomer. Naturally she ends up crushing on the current star Horse Girl Silence Suzuka, and the first two episodes certainly aren’t wasting any time setting up the Romantic Two-Girl Friendship.

My, there’s a lot of tropes there, not to mention the Loads and Loads of Characters already listed on the Wikipedia page.

In terms of entertainment, Umamusume is competent enough. I stopped watching a couple of times to do more interesting things but did finish both episodes. Assuming that the creep factor of the first episode doesn’t repeat itself, I may keep watching (especially if I’m bored).

However… there are two scenes where Spe-chan gets, to be blunt, felt up by her later “Trainer” (who I presume will be the viewpoint character for the forthcoming mobile game*). Granted he gets kicked, hard, but I very nearly “Noped” right out of there just on the basis of those scenes. Against that, there’s been no fanservice otherwise, and the general framing of the Horse Girls hasn’t been too heavily oriented to the Male Gaze.

Then there’s the unfortunate implications angle. Like KanColle, Umamusume risks whitewashing the animal cruelty etc of the horse racing “industry”. This excellent article from The Glorio Blog discussed the issues with KanColle, and a similar discussion is no doubt possible for Umamusume. It can probably start with the fact that the real Silence Suzuka was put down after an accident on track (not explicitly stated in the brief Wikipedia entry, but heavily implied), and move on to the breeding practices that may have led to the death of Campaign Girl whilst foaling Special Week.

On a snarkier level, I guess that this is what P.A. Works have to do to pay the bills**, but it’s a real drop from the likes of Nagi no Asakura, Shirobako, Tari Tari or Hanasaku Iroha.

Overall I’m not sure if I’ll keep watching, so this may be the only post on the show (hence my wanting to at least raise unfortunate implications for consideration).

*Because of course there’s a forthcoming mobile game that this is promoting.

10 thoughts on “Umamusume: Pretty Derby (2018): First and Probably Only Thoughts”