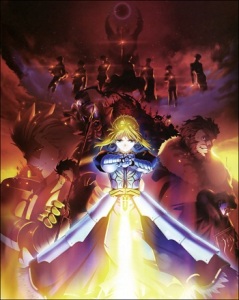 The Fate/[something][1] franchise is more or less omnipresent in anime fandom these days. From references in GATE: Thus the JSDF Fought There[2] to endless fanart and mentions in my twitter feeds the Fate franchise is very hard to avoid, and just as hard to avoid spoilers for.

Where to begin with the Fate franchise is a hard call[3], and after asking advice on Twitter I started with Fate/Zero, a prequel to the original game and anime.

NB: Many spoilers ahead[4].

200 or so years ago the Einzbern, Matou, Tohsaka magical families collaborated to create the Holy Grail, an artefact capable of granting wishes. There was only one problem: only one wish and the three families had different wishes. Hence, the founding of the Holy Grail Wars, with supposed oversight from the Church.

The wars are structured with 7 magical “Masters” who each summon a “Servant” of a different class: Saber, Lancer, Archer, Rider, Berserker, Caster, Assassin. The catch is that each servant is the reincarnation of a famous historical[5] figure.

Generally speaking the Servants are free to act as they please but depend on their Master for the magical energy/mana to manifest. The Masters also have three command seals on their hands that they can use to issue orders that the Servants cannot disobey.

The Servants employ “Noble Phanstasms” which are symbols of their legends and historical/mythological prowess. These can be fairly spectacular in action, and were generally well presented/animated.

The Characters In General

Time to be blunt: a significant chunk of the characters fall into the Neon Genesis Evangelion mould. That is to say some combination of:

In several cases you care about these characters only to the extent of wanting them to die horrible bloody deaths. Fortunately, some of them do. Alas, several don’t[6].

Overall this is an ensemble cast but I’ll make special mention of a couple of Master / Servant pairings.

These two are hilarious to watch. Waver stumbles into the Grail War out of a desire to prove that he is worthy of recognition as a mage. He winds up summoning Rider, who is the reincarnation of Alexander the Great, and through Rider’s none-too-gentle[7] mentoring develops into quite a respectable fellow, and one I’d be interested in seeing more of.

And then there’s Rider.

He is, in a sense, Brian Blessed given anime form. A glorious Large Ham reveling in Chewing the Scenery but also capable of subtle advice and nudges to Waver when they would do the most good.

Rider is huge fun to watch, and a complete show stealer.

Kiritsugu represents the Einzvern family and is, technically, the hero of Fate/Zero, the sole competitor for the Grail seeking a better world rather than a purely selfish wish.

Outside of his motives, he’s one of the reprehensible bastards populating this show and a firm believer in the end justifying the means.

The series attempts to paint Kiritsugu in a sympathetic light in two flashback episodes Distant Memories and Where Justice Is Found (episodes 18 and 19 respectively), but by then I wasn’t buying it. That said, it does set up the twist at the end nicely.

Saber is the reincarnation of Arturia Pendragon, and as idealistic now as she was as King of Britain. Saber also wants the Grail for idealistic, if flawed, reasons but really can’t work with Kiritsugu’s methods. So Kiritsugu actually sends her to fight the war with his wife Irisviel.

Irisviel is another Walking Spoiler character so I won’t go into too many details, but she’s a great character, and I really enjoyed her interactions with Saber.

Saber herself was generally a fair bit of fun to watch, albeit with not enough screen time due to the ensemble nature of the show.

Way too many to mention in any sort of detail.

The key point is that there are, supposedly, rules governing the Holy Grail War that the Tohsakas and the Church thoroughly subvert. Archer and Kirei Kotomine stand out as complete bastards in this section of the cast, and more or less get away with it.

The Matou family, with one exception that’s more of a victim, would be vastly improved by nuking them from orbit.

The less said about Caster and his master, the better.

Despite being compelling viewing throughout, I had a sense around the episode 6 – 12 period that the story was being dragged out to fill time. The premise demands epic combats that need to be definitively resolved. Constantly cutting those engagements short, and deferring them to later, starts to feel like a cheap trick after a while.

Fate/Zero gets away with it by each episode being individually compelling, but it wouldn’t surprise me to find that there are viewers who gave up in this period out of frustration.

Against that is the countdown at the end of each episode showing how many hours are left in the Holy Grail War, that ratchets up the tension nicely in the later episodes.

Fate/Zero is a prequel and needs to end by setting up the main characters for Fate/Stay Night. That said, the twist with the Holy Grail being omnipotent but not omniscient is exceptionally well handled.

At the critical moment, yes, Kiritsugu can save the world. Kinda. Sorta. But only within his established world view of the ends justify the means taken to its ultimate conclusion. He was hoping for a Grail that could go beyond what he could visualise, but when it can’t something has to give.

In a sense it turns out to be him.

His final orders to Saber essentially abandon his vision of saving the world at the cost of “acceptable collateral damage” and leaves him a very changed (and arguably broken) man. But there is a form of redemption for Kiritsugu as well, and one that is essentially the set up for Fate/Stay Night.

Fate/Zero impressed me a lot. It is well outside the range of anime that I’d normally sample, and is solidly engaging viewing throughout. The focus is always on the story, the creators felt no need to distract from it with fanservice which was a veritable relief.

What I’m not sure about is whether I liked Fate/Zero, or whether I want to try any more instalments in the franchise.

Fate/Zero is, in a sense, similar to the rebooted Battlestar Galactica, or Life on Mars in that it is a good show but not necessarily a show I want to see again or more of. I do recommend trying it to see if it works for you.

Questions of the Post: If you were going to suggest another out-of-my-comfort-zone show for me to try, what would it be? If I’m going to continue with the Fate franchise, should Unlimited Blade Works be my next stop? If not, what should I go with?

Here’s a collection of the OP/EDs:

[2] A bunch of the special ops teams use Fate inspired codewords in episode 9 The Hakone Night Battle.

[3] It’s a hard call just within the anime instalments. If you add in the games, the novels, the manga the problem becomes orders of magnitude worse.

[4] Well, spoilers if you haven’t already encountered them the way I did.

[5] Or mythological. A couple rather stretch the bounds of history.

[6] Fate/Zero is a prequel, so some of that was probably fore ordained. Whether I want to watch the sequel in the hope that they do get theirs eventually is still an open question.

[7] But not too rough either