On the third day of the Tokaido Trail, the tour heads to Kamakura. Amusingly, the Minami Kamakura High School Cycling Club anime was screening as I was planning this trip.

Courtesy of the CrunchyRoll news feed, here’s a couple of links with some of the scenery:

I’ll let you know what else I end up doing once I find out.

The train trips ran fairly smoothly and we then took taxis to the hotel where we left the bags but couldn’t check in yet. The hotel has this odd horizontal elevator that connects it to a conference/bridal facility, and from there we exited out onto the bay front near to the classic Enoshima Electric Railway.

Oh, and the hill next to the school that was a key scene in MinaKama.

Which I recognised immediately. This scene in fact: 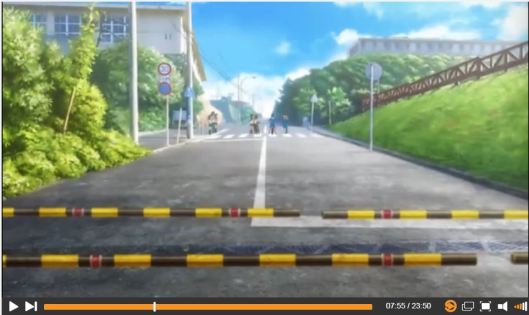 My photo is basically taken further up the hill at the pedestrian crossing but you can see why I was having deja vu for the rest of the day.

That set the tone for the day – so many places that we visited were ones that I recognised from MinaKama, and I’m absolutely going to have to rewatch it once I get back to Australia.

We bought takeout lunch (sandwiches for me, including a crumbed chicken cutlet sandwich) from the inevitable konbini (a 7-11 IIRC). I wasn’t sure about the concept of a cold crumbed cutlet sandwich (that one episode of Restaurant to Another World notwithstanding), but it really worked well. Something to keep an eye out for later if there’s going to be another lunch like that.

After that we caught the Enoshima Electric Railway to Kamakura station.

On at least the first ride on the Enoshima, it really is worth paying attention to the surroundings. The trains themselves are these charming little two car beasts, and the track weaves through housing and closely built areas in a way that I doubt you’d see anywhere else.

In a sense the relaxed the Enoshima is emblematic of the difference between Kamakura and Tokyo. Kamakura is much more relaxed in look and feel, not that we were relaxed once we got going.

Some of the tour dropped off the Enoshima at Hase station to do their own things. Those of us that went to Kamakura then transferred on another line to Kita Kamakura (“North Kamakura” essentially).

From there we started hiking the pilgrims route through the hills and visited the most interesting of the temples and shrines along the way.

The Start of the Hike

Not sure what this is.

Once again I had that sense of deja vu from MinaKama as I knew some of the temples and activities from episode 9 once the Brett’s explanations reminded me. Although I’m blanking on the name now the one where you walk through a tunnel to get to it.

The Light At The End of the Tunnel!

Once you’re through the temple, you wash your money to make it triple and this was one that I definitely remembered from MinaKama.

The Zeniarai Benzaiten Ugafuku Shrine is also, apparently, one of the sources of inspiration for the Legend of Zelda games, and fans of those games should recognise that when they see it.

This should be familiar…

Like many shrines the Zeniarai Benten has a collection of ema, or prayer boards, and I found this one to be quite charming if not already self fulfilling: 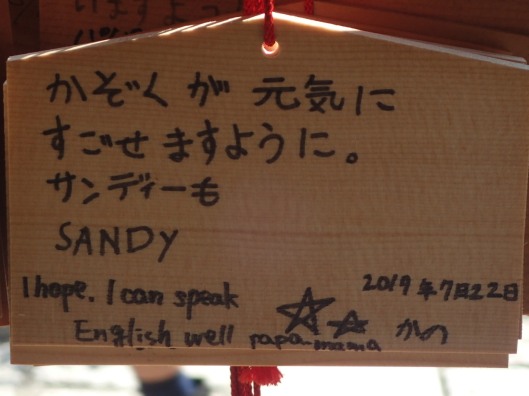 The hike itself is fairly challenging in places, and I’m reasonably pleased that I only fell once in the hardest spot (no damage).

Hopefully this gives an idea of how steep it was

On the other hand there are people living in Kamakura along the route of the hike who have to deal with this as being the view from their houses:

I don’t know how they manage.

The hike took about three to four hours and I collapsed with exhaustion fairly soon afterwards.

In terms of photography I was experimenting with the polarizing light filter today. The early chunk of hike photos (up to say the first Inari shrine), and the second batch of Daibutsu photos at Kotoku-in used the filter, everything else didn’t.

Speaking of the Daibutsu: 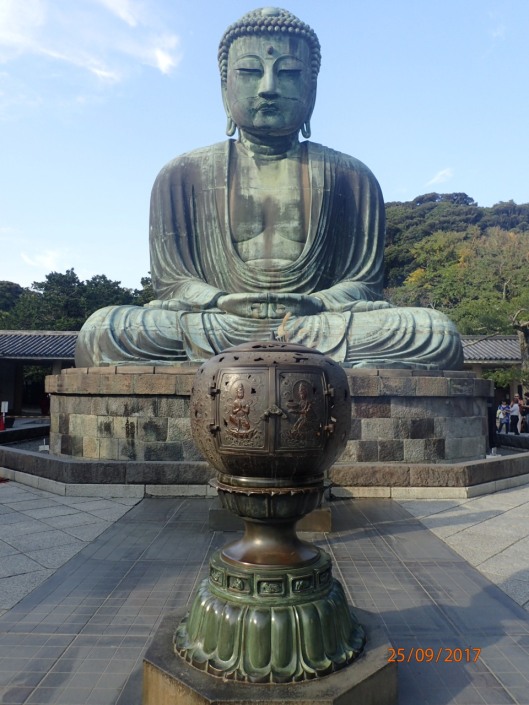 The last temple we visited was Hase-dera which is where I picked up this panorama of Kamakura:

After that we returned to the hotel to check in, collapse, and shower before dinner. On the way there were some what I now think were Kites overhead (see Grebouri’s comment below): 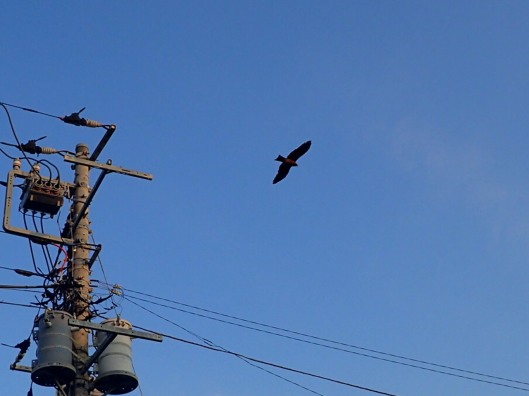 I also picked up a reasonably decent sunset shot:

Dinner was at a “Western” style cafe called Double Doors which provided a range of dishes, and offered fairly decadent desserts. Back at the hotel and preparing to separate my luggage so that a chunk can be sent ahead whilst I live out of a smaller bag for a couple of days.

I’ll collapse shortly because I’m really tired (but pleased, definitely pleased) after that hike and the sugar coma from that brownie should hit any time now…

The, ah, rather large photo gallery from today is here. Curating this lot may take some time after the trip is over. 😄