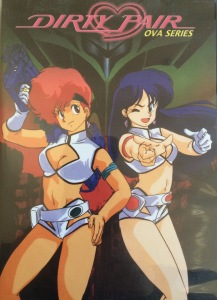 Episode 7 Revenge of the Muscle Lady! Is a Woman’s Spirit the Beauty of the Ring? is a welcome return to form for the Dirty Pair OAVs. It is a solidly constructed episode that’s also a lot of fun to watch[1].

Muscle Lady opens with Kei in an arena fight with an over muscled moron called Mad Bull. I strongly suspect that the design of the arena, a framework with dangling chains and weaponry, was inspired by Mad Max Beyond Thunderdome[2]. Yuri is watching from the stands of an arena big enough to make the “underground” status of this fight claimed by Mad Bull dubious.

Mad Bull also doesn’t feel any pain leading to a comment from Kei that he’s using Hustle, just before she’s thrown into the chains and tangled up in them.

Cut to the title card, and a flashback to the Lovely Angels getting briefed at WWWA headquarters.

Hard Muscle, or Hustle, is essentially an illegal super steroid that gives huge increases in muscle mass and strength with some nasty side effects. The user becomes highly aggressive, loses emotional control, and oh yes Hustle is highly addictive[3]. Hustle has been implicated in several murders and other crimes, leading Kei and Yuri to wonder why they’re involved since it really sounds like a job for the police.

Alas, WWWA has some dirty laundry to deal with here. The boss of the syndicate, Sandra Guts, went through Trouble Consultant training with Kei and Yuri[4] which is an embarrassment that the WWWA would like dealt with. So it’s up to the Lovely Angels to find and destroy the factory.

Back to the arena where things were looking bad for Kei until she cheats.[5]

Later on Kei is trolling a low rent bar for a Hustle dealer whilst Yuri is monitoring from a nearby boutique[6].  Meanwhile a minion reports Mad Bull’s loss to Sandra who immediately recognises Kei from the surveillance footage of the bar.

Sandra is clearly out for revenge, and orders Kei to be brought to her. At the same time Sandra hasn’t lost all sense and also orders her minions to prepare to move the factory.

Kei is picked up by the Hustle dealers, blindfolded, and brought to the factory. Yuri is a bit miffed at not being able to buy any clothes but follows.

The blindfold is removed to reveal a wrestling ring, and the full ritual of announcing the fighters and the overblown entrance of the favourite takes place. Sandra descends into the ring in an elaborate cloak on a platform attached to a giant cross.

It’s worth remembering that Dirty Pair was inspired by women’s wrestling, and the callout to that here works really well. As the fight between Kei and Sandra gets underway Yuri is trying to sneak into the base with limited success.

Whilst Kei is having a bad time in the ring, Yuri succeeds in entering the base and discovers that the factory is a spaceship being prepared to launch.

To create a distraction, Kei leads Sandra on a chase through the base but ends up with a damaged arm. One of the nice touches in this episode are the conversations between Kei and Yuri using their earring communicators. Whilst a lot of this is banter, it’s also passing useful information between them, and managing the operation.

As Kei is trying to crawl away from Sandra, Sandra tosses some Hustle to Kei and dares her to use it. It turns out that Sandra never became a Trouble Consultant despite being the top of the class, and is bitter about the clearly inferior Lovely Angels getting past the aptitude tests instead.

Kei throws the Hustle back at her.

Things are looking bad for Kei, but Yuri isn’t having a easy time of it either. Whilst Yuri manages to set a demolition charge on the ship, she’s interrupted and temporarily blinded before she can set it off. Kei manages to rescue her but they’re knocked off the ship before Kei can set the charges to blow.

So, the only way to complete the mission is to shoot the charge with a rocket as the ship is launching except Yuri can’t aim, and Kei can’t hold the launcher.

There’s something of a recurring theme of teamwork in this episode that you may have already noticed, and it’s probably why the Lovely Angels made it as Trouble Consultants when Sandra the Bully didn’t. Yuri holds the launcher whilst Kei aims it, and it works because their teamwork is so spot on.

Is this a formulaic, predictable resolution?

It still works, and it’s still a highly satisfying outcome.

The final bit of the episode is an angry Sandra trying to beat up the Lovely Angels but falling prey to a coordinated move on their part. Again it hammers home the theme, and the subsequent banter is very much a classic Vitriolic Best Buds moment for the franchise.

One of the things I really like about Muscle Lady is how logically the episode is constructed. Muscle Lady is a Dirty Pair episode that possibly makes more sense than any other, and still manages to have fun with the Lovely Angels being their usual destructive selves. In terms of the logic

Overall Muscle Lady is a clever, fun, episode of Dirty Pair and well worth watching.

The battle bikini percentage rises to 93%

Next up: That Little Girl is Older Than Us. The Preservation Was a Success?! Sleeping Beauty!

[1] It’s also a massive relief after the disappointing run from episodes 3 to 6.

[2] Mad Max Beyond Thunderdome was released in 1985, so it may well have had a Japanese release by then.

[3] Just the sort of drug you don’t want anywhere on your planet. Or any planet really.

[4] Although they refer to her as “Sandra the Bully”.

[5] Via a “shock ring” that’s effectively a taser.

[6] And trying out some clothes. Naturally. This is Yuri we’re talking about here.