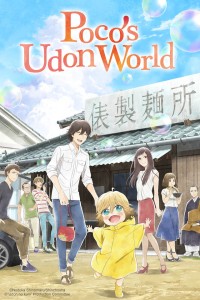 At first glance Poco’s Udon World is in a similar genre to say Usagi Drop or Sweetness and Lightning: a show about a sole father raising a child[1]. However it’s more of a tourist advert for Kagawa whilst reconciling a son to the memories of his late father.

It’s pleasant enough stuff, especially the tanuki masquerading as human Poco, but ends up being fairly shallow all told. Episode 12 Kakeudon was trying for an emotional reaction that the show lacked the depth to pull off.

The show makes a big thing of the rural Kagawa accent, especially with main character Sōta Tawara returning from Tokyo after the death of his father to clean up the house and close the family udon restaurant. This leads to some fairly creative subtitles on CrunchyRoll, but overall this aspect seems to be well handled in the translation.

On arrival Sōta discovers the tanuki Poco in the kitchen in a human(ish) form and basically adopts him[2]. Slice of life hijinks ensue, mostly showcasing local scenery from the area, with the remainder focussed on the difficulties Poco has maintaining human form[3].

In case the tourism links weren’t obvious, it appears that Kagawa Prefecture has been trying to change its name to Udon Prefecture, and has enlisted an actor Jun Kaname to front it as the “Vice Governor of Udon Prefecture”[4]. This article has a few more details, and here he is doing the episode previews: 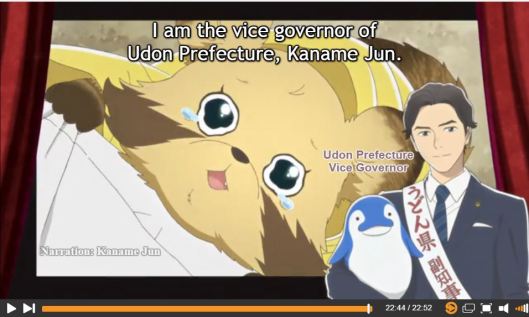 Another aspect of the Kagawa promotion is the insertion of the Gaogao-chan and the Blue Sky shorts. This is a kids Show Within A Show which in universe is being made in Kagawa, with a none-too-subtle message attached that this sort of work can be done successfully in Kagawa, and you don’t have to go to Tokyo for it. Gaogao-chan is strange, and quite amusing in the small doses seen within Poco’s Udon World[5].

The art style is a little odd, tending towards some rougher hewn character designs, but I found it quite appealing overall.

Over the course of the series Sōta finds himself remembering more and more about his decision to leave Kagawa to become a web developer instead of inheriting the restaurant, and beginning to regret not explaining things clearly to his father. Alas, there’s just not enough depth to this aspect of the story to generate much of a reaction by the time you get to Kakeudon.

Overall, Poco’s Udon World is a pleasant series to watch that won’t tax your brain too much. Here’s the OP which gives quite a good feel for the show (if you like this, you’ll probably like the show too):

[1] There’s been a fair few of those of late, and I occasionally wonder why this sort of story is becoming so popular at the moment.

[2] Although the direction of the adoption is open to question. It could well be Poco adopting Sōta.

[3] The ears and tail pop out occasionally, usually at embarrassing or comedic moments. As you’d expect.

[4] I don’t know if he’s actually the Vice Governor of Kagawa Prefecture.

[5] Gaogao-chan gets maybe 2-3 minutes at the end of most episodes.