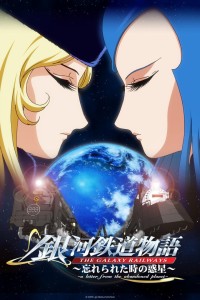 Abandoned Planet is further hampered by atrocious subtitles, including “I’m envy [sic] that you care about him so much.” Many of the translations are abbreviated, grammatically challenged, and I strongly suspect are missing context and key meaning. I would be interested to see what Frog-kun makes of it.

As a result it’s harder than usual to make sense of than is usual even for a Leiji Matsumoto story. That’s saying something given that Leiji Matsumoto has used the gunsight from a Messerschmitt to manually aim the turrets of a space pirate battleship[2], invented completely variant continuities[3], given a WWII battleship a submarine mode when it rolls over[4], and used space faring steam trains as a metaphor for the afterlife[5].

Some of the usual Matsumoto themes can be made out though – abandonment, orphans, young men seeking to prove themselves heroes worthy of the Cosmo Dragoons – even if resolving some of the conflicts seems oddly pat in at least one place.

There’s still a lot of what I like about Lejji Matsumoto’s work in Abandoned Planet. The character designs, are like most of Matsumoto’s work, quite distinct from the current trends. There’s that certain sense of style to the piece, and a partially successful attempt at a poignant tragedy with the “villain” attempting to revive his lost love.

But that’s not enough to save a show when I can’t connect to the characters properly, and there’s really too much missing from Abandoned Planet for me to do so. I suspect that it might work better with the preceding TV series, but I don’t have access to that.

Overall, pretty enough to look at, and in isolation a curiosity for fans of Galaxy Express 999. Other than that, I don’t recommend it.

[1] I might revisit this opinion if the TV series becomes available.