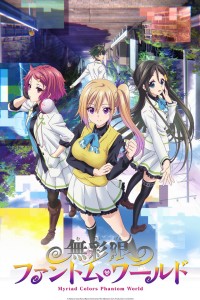 Based on the first episode Myriad Colors Phantom World has fabulous world building, some interesting characters, but dear lord does it really need to be that exploitative[1]?

Episode 1 Age of Phantoms is infodump heavy as it explains how the phantoms have become visible to the general population, and why a new generation has developed the powers to fight the phantoms. On one level this is refreshing: relatively few anime actually take the time to justify as a plot point why the super powered protagonists are in high school.

On the other hand, the infodumps are almost as clumsy as David Weber at his worst, and include an almost literal As You Know moment. It’s literal enough to be a lampshading of the trope. 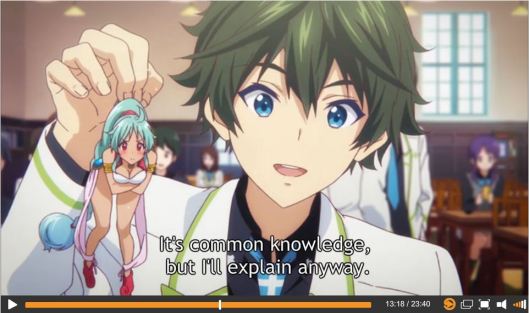 Yes, the subtitle really says what you think it says.

I was amused by the introductory tag dealing with illusions and issues with perception generally. That’s a nice hook to hang the series on, and there was some clever design work going on in that sequence.

Then there’s the fanservice. As a reference point here’s the OP:

Compared to the episode as a whole, the OP is actually relatively restrained when it comes to the fanservice and the gainaxing.

I think I’m going to pass on Myriad Colors Phantom World until the end of the season and I can see some reports on whether the story is strong enough to make tolerating the fanservice worth the effort.

At this stage, either the story will have to be very strong, or I’ll need to be very bored.

[1] The answer to that question is “no” by the way and I wish more studios would realise that.