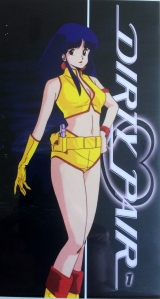 A contender for the most outrageous episode title[1], Go Ahead, Fall in Love! Love is Russian Roulette also delivers a couple of surprising firsts for the Dirty Pair TV series. For obvious reasons I’ll just refer to it as episode 3 for the rest of the review[2].

Episode 3 opens with a thief attempting to steal a poker chip[3], and getting vaporised for his troubles. That’s quite a security system. Cut to some fairly grumpy Lovely Angels[4] having their vacations interrupted because 3WA are sending them to the planet Vega retrieve said poker chip.

Kei and Yuri continue to bicker whilst driving through the streets to their hotel. As a result of the bickering, Yuri’s navigation directions come a bit late and Kei’s sudden reactions leave a trail of multi car pileups in their wakes.

Episode 3 is the first episode with scenes of truly incidental mayhem in the wake of the Lovely Angels. That was the first surprise: I thought it happened more often than that[5]. 🙂

To gain the attention of the crime lord King who holds the chip, Yuri stages a spectacular loss to him in black jack. This is a classic casino scene that feels like it came straight out of James Bond, and comes complete with Kei and Yuri in formal wear. It’s also the first casino episode for Dirty Pair, but not one of the surprises I mentioned earlier. Along the way they meet up with, and Kei starts crushing on, one of King’s employees Sydney[6].

After Yuri’s gracious loss, King invites them as to his mansion as guests. This is, obviously, a trap with King setting up the Lovely Angels for an arena combat whilst his other guests bet on the outcome.

However Sydney seems to be a 3WA agent in place as his search of the Lovely Angels is rather less than thorough, and he wishes them luck. The usual mayhem commences, with Mughi and Nanmo providing EW support and hacking the security systems.

Sydney is playing a double game and initially makes his escape with the poker chip in the confusion. We don’t see King meet an unfortunate end, but his mansion certainly does. Exploding power plants will do that.

In the final scene Sydney is caught by the Lovely Angels who more or less swindle him out of the chip in a way that he doesn’t discover until way too late.

The final surprise of this episode: at no stage do the Lovely Angels wear the iconic Battle Bikinis (admittedly Yuri does end up wearing rather less of her ballgown in order to move more easily). It’s a nice aversion of the Limited Wardrobe trope, particularly for such an older series.

This is another fun episode, and one that clearly shows a level of influence from the James Bond franchise on Dirty Pair. It’s worth noting that the shorter length of TV episodes does require things to move along rather more quickly, and with less exploration/character work, than is possible in a movie.

I’ll leave with the TV series ED. This is a nice song, but the simplicity of the supporting animation does clearly reflect the age, and budget, of Dirty Pair. I do kind of like the disco bally thing.

Next up is Pursuit Has The Smell Of Cheesecake And Death.

[1] I’m still considering a series of polls for this, please leave a comment if you’re interested in this as a feature of these reviews.

[3] It’s a special chip with legends of great luck etc attached to it.

[5] And it may very well do so in future episodes.