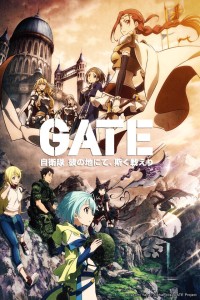 GATE: Thus the JSDF Fought There has developed into an interesting series, albeit one that I still have some concerns about.

In my commentary about the first episode the major concerns were around balancing the powers and devolving into a harem series.

The balance concern has been addressed nicely, but the harem tropes are definitely an issue, as are some issues with the handling of culture shock.

The story has moved on from “SDF curbstomps everything in sight” to “SDF sends out recon teams to meet the locals”. In essence the JSDF needs to know a lot more about the “Special Region” and doesn’t want to simply destroy everything in sight. So recon teams are sent out, and Recon Team 3 is led by our trusty hero Youji Itami.

And there’s the harem right there.

This shifted the focus to a more personal story, but has also definitely introduced the harem tropes. So far Itami has collected[1] Lelei[2], Tuka[3], Rory Mercury[4], possibly Piña Co Lada[5], and possibly Bozes Co Palesti[6]. That’s not counting a bunch of minor characters including a literal bunny girl, cat girl, and medusa that popped up in the last episode.

I’m possibly being a little critical here, there’s very little sign of romantic attachment in either direction so far. It’s also true that Tuka is coming across as Post Traumatic Stress case fixating on Itami as a possible substitute father to avoid facing her grief.

On the other hand it has also introduced Recon Team 3. They’re quite a fun bunch to watch, and in particular Shino Kuribayashi is priceless. Gung ho, excellent in combat[7], and really having a hard time dealing with her laid back otaku boss. Apparently Itami is qualified as a Ranger, and finding that out triggered a “Does Not Compute” moment for poor Kuribayashi[8].

One nice touch about shifting to the recon teams is that it addressed the balance concern. The SDF characters can’t simply destroy everything in sight, or at least need time to call in backup.

A few adroitly timed info dumps[9] about dragons being resistant to lighter weaponry made the story arc with the Fire Dragon nicely tense. The dragon felt like a real threat, and even better the recon team only managed to drive it off rather than kill it.

Other incidents have shown the limits of the SDF, whilst also scaring the daylights out of some of the locals. This has, so far at least, created the sweet spot of a balanced world where an interesting story can be told.

The politics of this series, on both worlds, remains thoroughly cynical. The background manoeuvring on Earth hasn’t noticeably affected the main characters. Yet.

The politics of the Special Region are another matter entirely. Having already lost the Imperial Army to the SDF, the Emperor almost gleefully arranges for his vassals to also attack and be wiped out.

Thus ensuring that the vassals don’t have enough strength to rebel. A charming fellow is Emperor Molt.

However although this broke the various armies, it didn’t entirely destroy them.

When the recon team turn up at Italica to sell dragon scales (see below), this brings them into contact with Piña who is trying to defend the town from said bandits, and not having a lot of success.

Fortunately Piña seems to be rather more decent than her father, although I still wouldn’t call her good per se. She may be more chivalric than most, but she’s still a feudal noble, and clearly thinks like one.

Although I have some concerns about which aspects are being focussed on, the strongest element of Gate is the culture shock of a feudal/fantasy society meeting the armed forces of a modern nation state.

The SDF’s insistence on adhering to the Geneva Convention[10] and in particular the proper treatment of prisoners and refugees has been surprising the locals. In the other direction, the SDF don’t recognise things of value in a fantasy world. For example dragon scales have a fairly high value and the SDF were basically leaving the corpses from their battles to rot until some refugees said “hang on, we can sell those.”

To which the female refugees more or less added “…instead of selling ourselves” with some relief.

This isn’t the only time where the intentions of (or towards) the SDF are misinterpreted on either side. In the aftermath of the bandits assault on Italica, and the SDF’s response in episode 6 Ride of the Valkyries[11], poor Piña is having an extended “Oh crap we’re screwed, how I do salvage this” moment. It’s not a good place to be trying to negotiate from.

This isn’t helped when Bozes captures Itami and doesn’t treat him particularly well. Piña’s then orders Bozes to “persuade” Itami to let it drop. See earlier comment about the refugees, and my concerns about the focus of the culture shock elements.

Despite this, GATE is actually doing a fairly good and occasionally funny job of using the culture shock as a way to drive some solid character based storytelling. As I noted earlier, Piña isn’t what I’d necessarily call a good person, but I do have a fair degree of sympathy for her misguided efforts to limit the damage to her homeland.

Episode 8 will have characters from the special region loose in Tokyo, so I suspect that the culture shock is only going to get worse for some[12].

GATE is continuing to command my attention. Itami remains a capable lead and the growing cast is adding a lot of fascinating interactions to drive the story. Definitely worth a look despite the harem elements, and the occasionally excessive focus on the salacious aspects of the culture shock.

[1] Or rescued, collected by, or assaulted. It varies.

[2] A blue haired sorceress and apparently a natural linguist.

[3] A blonde orphaned elf spirit mage that isn’t a Deedlit expy. Honest. Well, at least Deedlit wasn’t an archer which Tuka is (at least according to TV Tropes)

[4] AKA Rory the Reaper. A gothic Lolita demigoddess of the god of Death. Also deeply disturbing on a number of levels, particularly when she smells blood…

[5] A Princess of the Empire, and leader of the Order of the Rose. And, yes, that really is her name.

[6] One of Piña’s knights from the Order of the Rose.

[8] Although to be fair I can’t really blame her for that.

[9] Yes, it is actually possible to do infodumps well

[10] More or less, and not actually named as such but that’s clearly the general intent.

[11] That’s not the only Apocalypse Now shoutout in that episode – they actually play Ride of the Valkyries in a helicopter assault on ground troops and name check Lt. Colonel Kilgore.

[12] I also expect to be tweeting “This can’t end well” at some point on Saturday next week.