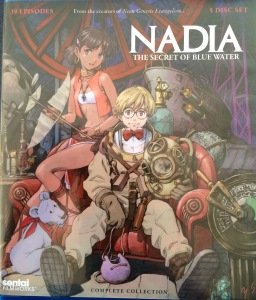 The cover for the U.S. Edition.

I’m currently halfway[1] through Nadia: Secret of Blue Water and still enjoying the ride. Most of what I said in respect of the first disc is still true but some aspects have begun to grate a bit.

Well, straw-woman I suppose. Nadia is a pacifist, and a vegetarian at minimum if not an outright vegan. The problem is that the scripting for Nadia about this is, well, clumsy and caricatured, a Straw Vegetarian. The level of writing displayed does make me wonder if any of the scriptwriters even knew any vegetarians.

This doesn’t sit well with me, particularly for a character I’d like to be sympathetic with, and who really should have been the lead character.

Jean is the lead character

Look I know it says Nadia: The Secret of Blue Water, but Jean really is the main character in this series. This second batch of nine episodes makes this brutally clear with Nadia really only having centre stage in parts of two episodes, and Jean being a key viewpoint character in at least half.

Even when Nadia is the main character, the Strawman Vegan (see above) tends to dominate, which is somewhat annoying.

Oh dear. The fanservice hasn’t been too bad, in fact there’s been barely any[2] by GAINAX standards, but the gender roles in general have been about what you’d expect. Partly this is the sidelining of Nadia, partly this is the rivalry between Grandis and Electra over the oblivious[3] Captain Nemo, partly the fanclub for the nurse[4].

To be fair, Electra is generally an effective character as the first officer and Jean’s primary science teacher. That said, the general feel of the gender roles is not good.

I’m still finding Nadia to be highly enjoyable, but some of the cracks are starting to show. I’ll move on to the third disc soon, but I’m likely to start skipping once I hit the Island episodes.

Unless of course I’m feeling particularly angry and want a safe target to vent fury at. In the meantime here’s the ED:

[1] And probably 2/3rd if I discount the Island episodes.

[3] An alternative interpretation is that Nemo knows exactly what is going on and pretending not to in the hope that it will go away.

[4] Who appears to be the only other female on board, and whose name appears so infrequently I’ve forgotten it.