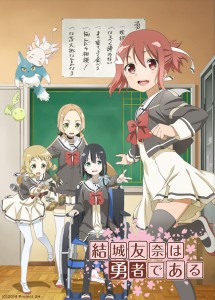 Despite some very emotionally satisfying moments I think Yūki Yūna wa Yūsha de Aru may have stumbled at the finish like so many anime before it.

I think that the problem is that the finale is satisfying on a personal level when it needed to be at a global level. For 11 episodes the motto of YuYuYu[1] was “Well, that escalated quickly”, and yet it failed to do so in the finale.

If you’re reading this post I’m going to assume that you’re familiar with the premise.

One thing I will give YuYuYu credit for was keeping the viewer guessing as to exactly what the story was about, and using the changes to examine different aspects of the main characters lives.

The initial introduction of the Vertexes[2] escalated YuYuYu from cheerful moe slice of life to magical girls fighting alien invasions, with clear influences from both Puella Magi Madoka Magica[3] and Neon Genesis Evangelion[4].

This gave the impression that YuYuYu would be a monster of the week show until the 12 vertexes were defeated. That didn’t last: episode 5 Overcoming Adversity was another “Well, that escalated quickly” moment that left me wondering “now what?”

When the War is Over?

Episode 6 In Anticipation Of… shifted towards dealing with the after effects of combat, both physically and mentally. I’ll be honest, I was actually hoping around episodes 6 and 7 that this would be the main story of YuYuYu. It isn’t a topic that gets tackled often, and I was already confident that YuYuYu was sufficiently well scripted to handle it well.

It says something about YuYuYu that episodes 6 and 7 brought this Cold Chisel song to mind.

I was also impressed by how poignant Karin’s story was in these episodes: raised for battle and trying to make a life when your purpose is gone is not an easy place to be. Karin’s difficulties were convincingly rendered in these episodes, and won a lot of sympathy from me.

Meanwhile the other characters who went Mankai are trying to deal with their new disabilities and how to fit these into their lives.

It’s Not Over and it’s Getting Worse

Then came the exposure of the lies of the Taisha in episode 8 Blessings of the Gods, and the realisation that the battles would never end. That the price to be paid by the heroes would always rise and be ever more heartbreaking.

Whatever else can be said of this part of the story, episode 9 Those Who Know Grief is one of the most powerful anime episodes of 2014. Fu’s grief for Itsuki’s lost voice is so convincing and the rage that rises from takes your breath away. Seeing Yuna, Karin, and Itsuki fight and talk Fu down was a simply beautiful moment to see.

Meanwhile episode 10 Bonds of Love convincingly expresses Togo’s own rage at the injustices perpetrated on her and on her friends, even if it leads to a grievous error that is only fully revealed in episode 11 Passion.

Passion is Karin’s crowning moment[5], the completion of her transition from weapon to person, and ultimately an easy person to like.

The thing is Passion is the episode that created the greatest expectations for the finale: that Yuna would somehow restore the world or otherwise end the cruelty of the hero system.

Missed it by THAT Much

Yes, the current heroes are saved.

Yes, the world (or what’s left of it) is also saved for the moment.

Yes, the damage done to the heroes is eventually repaired[6].

But… the world still exists only as fragment and the vertexes are still out there. 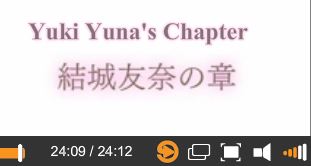 Ultimately nothing has changed for the world even if the characters we care about have been personally saved.

I will admit that the personal resolutions are satisfying, even deeply so, but it still feels like YuYuYu missed the finale that it should have given us.

There’s even an admission of this in the end card which implies that there will be more chapters.

I, and a number of friends, were initially impressed in episode 2 Noble Thoughts by how Togo’s hero transformation adapted to her disability without removing it. At the time this felt respectful towards the character, and provided a message that a person with a disability can still be a hero.

Whilst seeing the disabilities heal in Smile at You is emotionally satisfying, deeply so when Itsuki’s voice comes back, I’m concerned that it undermines that previously respectful treatment of disability by YuYuYu.

Having the disabilities all just… go away at the end seemed not quite right. Apart from anything else disabilities need representation in popular culture too, and I feel that healing them this way diminishes that.

As noted in the first thoughts this is not a topic I feel comfortable being definitive about. I could easily be wrong about the handling of disability by YuYuYu and I welcome any corrections or comments that readers might have on this topic.

Whatever else can be said YuYuYu is not a trivial or generic anime. There is substance here, and whilst it may be substance that can be criticised, YuYuYu is also a show that should be receiving far more attention than it has been.

[2] I’m fairly sure that should be “vertices”, however “vertexes” is how it was subtitled (and possibly pronounced).

[3] Costumes and characters. I defy you to look at Yuna and not see Madoka. Similarly I defy to you look at Togo and not see Homura.

[4] The design of the vertexes, and the alarms on their phones, are clearly nods to Neon Genesis Evangelion.

[5] FOUR MANKAIS IN A ROW? FOUR? Ye gods but that girl doesn’t know when to quit.

[6] Although fixing the disabilities may be problematic in and of itself.