My first thoughts on Shirobako are more or less unchanged. This fabulous character based show about the business of making anime is engaging, fun to watch, and telling an interesting story.

Oh, and Tarou is still the character everyone loves to hate.

Aoi is continuing to develop as a production assistant, particularly after getting episode 13 dumped on her at the last minute.

The final episode of the cour contained a tribute to experienced animators, and also showcased Aoi’s increasing confidence and ability to network.

In terms of where the 2nd cour is heading, I don’t think we’ll see Aoi and her friends strike out on their own just yet. However we will see Musahino Animation acquire their next title, and see how production commences. Recent episodes have touched on the negotiation process, and there was also a sense of the overall pressure on the studio decreasing as Exodus to Tomorrow wrapped up. 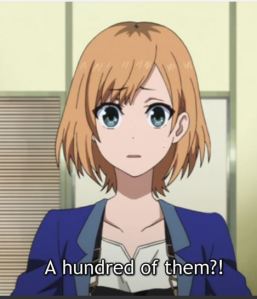 Which is not to say that the pressure on Aoi was decreasing. Far from it as the final episode featured an insanely ambitious set of storyboards for which the scenario was only finalised at the end of episode 9 What Do You Think I Was Trying to Say? The moment at the end of this episode when Aoi realises just how hard managing the animation of 100 horses is going to be for her is one of the truly glorious Oh Crap moments of anime.

Working through the final episode and desperately trying to find enough good key animators drives the remaining episodes of the cour, and the element of respect for older animators shown towards the end is just beautiful.

In particular the way that the younger team members jumped at the chance to learn from Sugie-San once he stepped into the limelight was just beautiful to see. 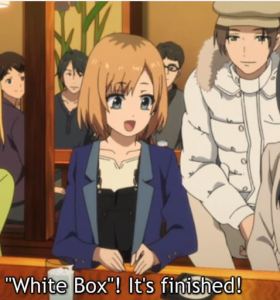 I did like the Title Drop right at the end; that was a really nice touch.

With the late challenge by YuYuYu falling just short at the last minute, Shirobako is still the star performer of the exceptional Fall 2014 season, and I’m looking forward to it dominating the Winter 2015 season as well.

And just because I like it so much here’s the OP Colorful Box to the show named White Box:

[1] Or in the original: the shirobako.

[2] It reminded me of the 2010 Australian federal election. I had two twelve day weeks (if I didn’t get a weekend then the week didn’t end), and the sense of relief afterwards as the adrenaline drained away was amazing.