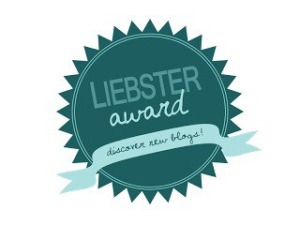 Artemis over at Otaku Lounge [1] had some really nice things to say about me when she included me in her list of Liebster award nominees.

I’m taking this as a chance to shine a light on some blogs that need more attention.

The Liebster award is intended to give some exposure to small blogs with less than 200 followers. The rules are as follows:

Starting with the questions that Artemis had for me:

1. When did you first start blogging, and do you realistically see yourself still blogging in, say, 10 years from now?

I initially started blogging on LiveJournal in 2006 to keep track of a cycling trip along the Great Ocean Road. This quickly evolved into primarily anime/science fiction reviews, but there are still health/fitness posts occurring.

I will probably keep blogging as long as I can type. It is a means of communicating with friends who are often at the other end of the continent, and of clarifying my own thinking. I really can’t see myself stopping, although post frequencies will be variable as life happens.

2. Describe your favourite country in the world in 3 words.

3. You have to pick one country in which to live for the rest of your life, but it can’t be a country you’ve already lived in before. Or Japan. Where do you choose and why?

5. What was the first television series (anime or otherwise) you ever fell in love with? Nostalgic merits aside, do you still love it today?

This is a bit complicated as I discovered when I wrote the “Very First Anime” post to kick off Thirty Days of Anime in 2010.

Robotech is probably significantly less watchable now (if only because I’ve seen the original Macross and Genesis Climber Mospeada), but Gall Force has retained a surprising punch to it.

I still won’t have a word said against the original Vampire Princess Miyu OAVs, I still adore the subtlety of that show.

6. What’s been the single best and worst television series (again, anime or not) of 2013 so far?

That’s a tough one. In terms of the series that I actually watched this year (as opposed to were released in 2013), I would probably pick Anohana and Kids on the Slope as the standouts.

Nagi no Asakura is the star pick for 2013 vintage anime; it has been getting steadily better and is only half done.

In terms of worst it is even harder as I tend to drop bad anime quickly, and then forget about them.

No, on second thoughts, Walkure Romanze if only because of its rant worthiness.

7. If you could have any one superpower, what would it be?

8. What did you want to be when you grew up, and would you still do that if you could?

At one point I dreamed of being an astronaut, but physical reality (see below) soon put paid to that.

9. Do/did you play any sports?

Do I play silly ball games? HAH! I say. Look, I shall say it again: HAH!

More seriously sports tend to require hand-eye coordination, of which I have none.

10. Have you ever spent more than a couple of days in the hospital?

I think the longest was a couple of days for observation once due to some odd gut pains that could have been, but weren’t, appendicitis. I think the wisdom teeth were overnight, possibly a second night, but that was it.

[Aside: My wisdom teeth were a) horizontal and b) pointed forward. Dentist took one look at the X-ray and said those are coming out and that he wasn’t going anywhere NEAR them]

11. In a world without internet, how would you probably spend the majority of your free time?

I suspect that there would be more reading, board gaming, and anime. That’s pretty much how it was before the internet.

I don’t actually follow that many blogs, and many of the ones I do follow have already been picked up by this game. That said:

Hmmm. There seems to be a pattern there. With any luck this will inspire them to post more.

It’s the end of the year so I’m not going to get too creative with the questions. In fact I’m going to recycle some of my Thirty Days of Anime posts from 2010 as the questions. So here they are (with links to my answers):

1. What is the best instalment of an anime/manga franchise you don’t like? Mobile Suit Gundam 0080: War in the Pocket

2. What is the worst instalment of an anime manga franchise you do like? WXIII: Patlabor the Movie 3

3. Give your favourite genre a reality check. Romantic/Heroic Space Pirates

4. Name one (and only one) change you’d like to make to one anime. Give the original Record of Lodoss Wars an animation budget

Kanzaki Hitomi, The Vision of Escaflowne

10. What is the most epic scene in anime? Launch day in Royal Space Force: The Wings of Honneamise

11. What is the anime with the best background music? The Silent Mobius films, especially the 2nd film.

[1] Tagline: “Come chill on the couch”. I approve of this sentiment. 🙂

3 thoughts on “The Liebster Awards”