Fujiko Mine, Hanabee, Lupin the Third 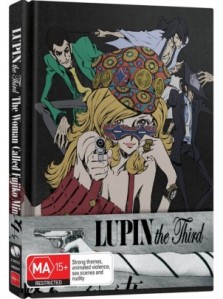 In some respects Lupin the Third: The Woman Called Fujiko Mine is one of the most confronting anime series I’ve seen for a long time. In others Fujiko Mine [1] hasn’t yet been as explicit as ef: a tale of melodies but I expect that to change in the final 5 episodes.

In short this is a series that comes honestly by its MA 15+ Restricted rating in Australia.

TRIGGER WARNINGS ahead for implied abuse, implied sexual assault, and self harm [2] in the series (if not directly mentioned in the review).

Before I get to the nasty stuff I want to talk about some of the things that impressed me about this show. I know I raved about Hanabee’s presentation of the Bakemonogatari sets, but I think that the Fujiko Mine presentation is even better.

The hardcover book is styled in the predominantly dark colours of the opening animation, and the imagery includes a number of stills from the opening [3]. Without being a spoiler this really helps set the mood for the series, and also warns the viewer about the animated nudity that’s coming.

The foldout showing Fujiko holding the other main characters in the palms of her hands is also appropriate to what is to come.

The liner notes contain solid character descriptions, credit the Japanese VAs [4], and some quite clever episode descriptions that are intriguing without spoiling the key to each episode.

I managed to avoid dropping the discs this time, but having to pull them all the way out to work out which is the DVD and which is the Blu-Ray was a little annoying.

Despite those quibbles this is a truly beautifully presented set of discs, and I have to admit to being tempted to buy a set just for the presentation.

I will forgive many sins in anime if they are committed with style.

Style is one thing that Fujiko Mine never lacks. There was a deliberate choice to preserve the character designs from earlier incarnations that really makes this series sing visually. There are no moe blobs here, instead there are characters with sharp angles, clearly defined noses, and pointed chins.

The darkness and edginess of these characters is built into their designs, and is very effective in setting the tone of Fujiko Mine.

That said, much of my limited contact with the Lupin franchise has been through the more light hearted entries such as The Castle of Cagliostro or The Fuma Clan. Fujiko Mine still has the comedy, but it is there to leaven the darkness with some fun.

The same applies to some of the ridiculous action sequences, particularly one in episode 7 involving Goemon [5].

One of the running gags in the Lupin the Third franchise is Fujiko coming up trumps both against the team of Lupin, Jigen, and Goemon and against the police in the form of Zenigata [6].

Fujiko Mine is structured as a prequel to Lupin the Third that cleverly sets up the running gag, and may lead to setting up Lupin’s team as well. So the episodes in the first half are encounters between Fujiko and one or more of the other main characters. The first three are also first meetings between Lupin, Jigen, and Goemon respectively.

The primary focus remains with Fujiko throughout so these aren’t quite Day in the Limelight episodes. However they do have the same effect of setting up and exploring the interactions between the characters.

It also becomes clear that Fujiko is considerably more ruthless than any of the other characters, and this goes a long way towards establishing why the running gag exists.

Overall the first half works well enough on a character level to have me looking forward to the 2nd half.

Most of the triggering elements come up with respect to minor characters that only appear in one episode. I won’t spoil the details, but be aware that these issues will come up.

For the most part, including Fujiko’s casual attitude towards nudity, it is the Fujiko of the opening that is seen within the episodes. However there are occasional hints, particularly in episode 8, of what is implied by the closing animation. I do wonder if the 2nd half will explore this more fully, and I have to admit that I’m not particularly looking forward to that.

The Opening, the Closing, and what they say about Fujiko

These are quite frankly disturbing. The opening shown below doesn’t have a song but a monologue from Fujiko that is coming from quite a dark place psychologically. The imagery is disturbing enough but it is the dialogue that is where the true darkness lies.

That said there is a degree of strength, of control, coming from Fujiko’s monologue in the opening that converts much of the nakedness (implying vulnerability) in the opening to nudity (implying choice or strength).

The way that the closing inverts this is even more disturbing.

There is less nudity, but also less control, with the younger Fujiko seeming particularly vulnerable. This closing is fairly blatantly suggesting that Fujiko has a dark, and possibly traumatic, past. The hints in occasional flashbacks have only served to confirm this. This may make the 2nd half of Fujiko Mine difficult to watch [7].

Given the presentation I shouldn’t complain too much but there are no extras at all on these discs. Not even a textless opening [8] and closing.

The other oddity is that the set contains both a Blu-Ray and a DVD. The DVD version has episodes 1 – 7 & the Blu-ray has episodes 1 – 8. I presume that this was a size limitation on the discs but I think I would have preferred a Blu-Ray only set with all 13 episodes; I don’t really understand the appeal of the combination sets.

In its first half Fujiko Mine is a distinctive anime which creates an original feel from retro designs. That’s a really neat trick and speaks well to Sayo Yamamoto’s skills as a director.

The strong setups of the characters, and their relationships, make this that rarest of birds: a prequel that actually works.

Overall, and despite the risks inherent in probable subject matter, I’m looking forward to the 2nd half (although I’m reserving judgement until I see it).

[1] The full title is just way too long. From this point on I’ll simply refer to the series as Fujiko Mine.

[2] I think that’s most of the necessary warnings. If you think I missed one then, as per the Site Disclaimer, please let me know and I’ll correct the post.

[3] The liner notes don’t include any of the imagery from the closing, which I think is wise.

[4] I’m slightly surprised that the American VAs didn’t also get credited. Then again I haven’t watched the dub.

[5] You’ll know it when you see it. Just let it fly by and don’t question it. [Pun intended by the way.]

[6] For example in Castle of Cagliostro it is Fujiko who ends up with the plates, and I recall something similar happening in The Fuma Clan.

[7] That wouldn’t be the first time. I had a similar experience with ef: a tale of melodies.

[8] It is admittedly debatable as to whether a textless opening is actually useful for Fujiko Mine since so much of the effect is bound up in the dialogue.