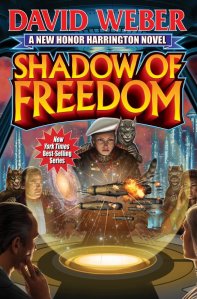 One side effect [1] of attending conventions [2]is coming away with a to-read pile best described as “eeep!” [3]

This included the quite enjoyable Shadow of Freedom.

Shadow of Freedom runs parallel to Mission of Honor and A Rising Thunder and, as with its predecessors in the Saganami Island series, is tightly focussed on the Talbott Quadrant.

Shadow of Freedom is also a big improvement on its frankly execrable [4] predecessor Storm from the Shadows. It feels much tighter, reads faster, contains some very interesting things going bang, and ends on a cliff hanger.

Without giving anything away, this is a cliff hanger for something that fans of the series really want to see happen right now.

The infamous David Weber infodumps are still there, but are not as excessive as they have been in other instalments.

In terms of characters Aivars Terekhov, Abigail Hearns, and Helen Zilwicki all get a reasonable amount of page time, and some really nice moments. Alas Abigail is still a Lieutenant and Tactical Officer so it may be another book or two before we see her with her first hypercapable command.

However it is Michelle “Mike” Henke, Admiral Gold Peak, who is the central character of Shadows of Freedom and who makes this book sing. Mike is faced with a range of challenges, and a constantly changing state of play, and responds in some fascinating ways [5].

My two biggest complaints are a dangling plot thread that is left unresolved, and the cover.

It isn’t a bad cover per se; it’s just that Mike isn’t on it.

The characters I’m seeing are Hamish, Honor, Elizabeth, Eloise Pritchard and probably Theisman. Given that none of these characters actually appear in the novel this is a fairly extreme case of Covers Always Lie.

I’m also a little concerned that it might also be a case of whitewashing. Certainly Elizabeth is fairly accurately presented, but she’s also in the corner.

Overall Shadow of Freedom is a strong addition to the Honorverse, and one that makes Mike Henke a lead character in her own right. I enjoyed it, and I think that most fans of the series will as well.

[1] For me at least. The weight of my suitcase doubled.

[2] As you may have noticed I was at Continuum 9 last weekend.

[3] Among other things I now have a pile of 17 Oh My Goddess! volumes to read and review. I make no promises as to when these reviews will happen.

[4] My recommendation is to skip Storm from the Shadows entirely. Most of what you need to know can be picked up from the mainline novels.

[5] Yes, I know that is cryptic. I’m trying to keep it spoiler free here.