One of the good things about SwanCon for me is the opportunity to play new board games. I’ve played a reasonable number this weekend, so here are some thumbnail reviews for future reference.
Tsuro
Tsuro is a fast tile placement game where the goal is to keep on a path that won’t run you off the board.

The problem is that if someone places a tile in front of your current location you automatically move to the new end of your path. This leads to a fast, fun, and often unpredictable game.

The image above would end badly for both Red and Yellow…

I’m definitely going to have to pick this one up in Canberra. Apparently there’s an expansion that is the best version to get.

Gaeon
Gaeon is a game that is still in play testing, but shows a lot of promise. I’ll happily pay $50 – $60 for it when it hits commercial release. 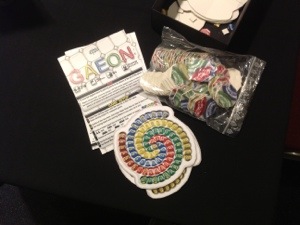 One of the truly interesting mechanics in Gaeon is the separate scoring by colour for each player, with a player’s final score being the lowest score across the colors. I’m looking forward to that one coming out commercially, and may see if I can acquire one of the playtest copies.

Rumis
Rumis, aka Tetris: The Board Game, is a fascinating geometric game where tiles have to be placed vertically with a player’s final score being the number of faces visible from above at the end.

Placement restrictions make this challenging. The main restrictions are connections to existing tiles of the same player, height restrictions by map, and only placing vertically – no dodging around obstacles.

I believe that this is no longer available under the Rumis name, but has been re-released as Blokus 3D. I’m not including a photo of this one, but may review it in more detail once I have a) a copy b) a real keyboard and c) a word processor*

Grand City
Grand City is a mafia themed game where the objective is to dominate the underworld in the fictional “Grand City”. It is semi-cooperative with players secretly assigned allegiance to one of three families (or possibly as a police informer known as “The Rat”).

I’ve played some other games, but I don’t have any particular impressions to report at this time. Overall it has been a great gaming programme this year and I’d like to thank Terry Chilvers and his team for the enormous effort they’ve put in.

*I’m typing this on the iPad in the gaming room, hence the lack of linked and snarky foot notes.