Ignition is an astonishing episode of Planetes that confronts psychological trauma, and post traumatic stress, head on. This is extremely rare both in anime and in television in general. The only other example that springs to mind is the season 2 The West Wing episode Noël.

Trigger warnings for mentions of suicide are applicable to this synopsis. 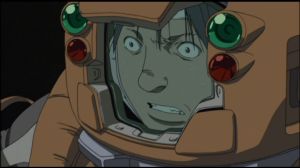 All alone in the dark.

The tag is a hyperventilating Hachimaki with static on his helmet display, no response on the communications, a rapidly increasing heartbeat, and ever more panicked cries for help as he drifts alone into space.

I remember the first time I saw this scene. It was a real “what the hell just happened? Where’s Ai? Where’s the Toy Box?” moment.

The sense of fear, of abandonment, of dying alone out there in the dark is very real in this scene, and it hangs over the entire episode.

The crew of the Toy Box are sitting in a corridor. Fee is blaming herself for the accident as Yuri tries to reassure her that it wasn’t her fault. He explains the circumstances of the solar flare.

Fee isn’t buying it, especially as she had called Ai back in. The door opens and a nurse is faced with a frantic Ai.

In the room with the scanner a relaxed Hachimaki is laughing it off, and this triggers Fee’s transition from worry to anger. It turns out that Hachimaki made some mistakes as well, and out of her own fears for his safety Fee isn’t willing to let them go.

This does trigger an apology from Hachimaki, but also tears of relief from Ai.

Down on Earth some of the senior Technora executives are discussing Dolf’s success with Second Division. There is some backstabbing being planned here, with the excuse that Dolf’s unconventional methods are complicating relationships with INTO. This is the reason that he won’t be getting a Vice President’s slot.

Hachimaki is ready to check out of the hospital when he is called for one final test. He is called to the Sensory Deprivation Chamber to confirm his ability to handle being alone in the dark.

Ai remembers having to stay in the room for 6 hours to get her EVA licence.

Hachimaki isn’t handling it, and the doctor was worried that this might happen. All alone in dark, cut off from all communication, Hachimaki’s terror has turned into Spatial Loss Disorder and it could end his career as an astronaut.

He lasts minutes at best before collapsing in terror.

Hachimaki is in denial, claiming that the failure was due to being hungry and not rested. He is determined to prove the “quack” wrong.

After he leaves the table, Ai asks if Hachimaki will be OK. Yuri points out that this is a psychological problem so recovery is up to him. Fee is confident about his optimism, but Yuri isn’t so sure. Yuri points out that failing to overcome Spatial Loss Disorder will revoke Hachimaki’s EVA licence [1], and this must be deeply terrifying for an EVA specialist.

This time there’s a high pitched noise in Hachimaki’s head and he starts hallucinating that he’s falling. Ai is horrified in the control room, and this is a disturbing scene to see the hero brought so low.

Claire and Hakim are talking about Hachimaki’s rehabilitation in a cafe on ISPV-7. Claire is worried, but it is proceeding on the moon. Claire claims that it is no more than worry for a colleague, but it sounds unconvincing.

In the Debris Section Ravi has been off doing his performances, and apparently persuading the other departments to cover for the Debris Section. This is apparently to grant enough time to send Fee and Yuri to the moon to join Tanabe. The inclusion of this scene instead of the Audio Drama 6 makes no sense to me, beyond a quick shot of a worried expression on Edel’s face.

Yuri is about to head off when a bunch of Hachimaki’s friends intercept him to send a care package that they all pitched in for.

Fee is talking to Gigalt on the phone, and they are both worried that Hachimaki will be sent back to Earth. Gigalt has something in mind that will cure any true astronaut, but if it doesn’t work Gigalt will personally hand Hachimaki the dismissal papers.

In the lunar hospital, Hachimaki is staring up at the earth in the same chair, and posture, that Nono was using in Extraterrestrial Girl.

Ai is talking about running into the ninjas whilst Hachimaki is using one of the hand exercisers. For the first time in the series he isn’t using a green one. This is the first evidence that Hachimaki has been working out as I’m assuming the blue means a higher rating [2].

Apparently the ninjas have found jobs at the test site on the dark side of the Moon. This is where the engine for the Von Braun is being built and tested. Hachimaki isn’t really paying attention, and he reports to the next test with a sense of fatalism.

Nono sees them as they head towards the test, but Ai apologises and promises to talk after the test. Nono’s innocent belief that “tests are really important” is almost heartbreaking for the implied lack of understanding.

This test doesn’t go any better than the others as Hachimaki finds himself hallucinating again. This time it is a much younger Hachimaki at the beach followed by sequences drawn from the closing credits.

The primary school student Hachimaki running along a fence with a toy rocket.

The high school student Hachimaki racing cars on his bicycle.

The university student Hachimaki riding his motorbike towards the rocket launch.

Finally Hachimaki is facing a suited version of himself that calls him a coward looking for an excuse to go back to Earth.

What follows is, I think, the closest that Planetes comes to a clip show.

There are a lot of flashbacks here that challenge who Hachimaki is, and what he believes in. The clips mostly present Hachimaki’s dream to own his own spaceship [3] in the most negative light possible.

This sequence is hard to watch, and it is the moment when Hachimaki is at his lowest. The hallucination offers Hachimaki the excuse of going back to Earth whilst being able to deny giving up.

“If it wasn’t for that illness, I’d still be up there with my own spaceship.”

Hachimaki doesn’t accept this, but ends up head butting the door whilst hallucinating.

Hachimaki wakes up in his hospital bed as Ai enters with a vase for some flowers. Ai tries to cheer him up, but isn’t getting through.

Ai makes the mistake of suggesting that Hachimaki goes back down to Earth to complete the rehabilitation process. This does get through, but in the worst way possible.

At reception Fee and Yuri are asking about Hachimaki when Yuri enters the lobby to tell them that Hachimaki has gone missing.

As the search proceeds Ai runs into Nono. I have to give Nono credit here for confessing to her secret exit to the surface at this point [4].

Ai is pleading for Hachimaki to calm down, but Fee brutally asks if this is suicide and explicitly refers to Harry Roland’s death in Extraterrestrial Girl. Fee makes the comment that suicide might be better than dealing with a lifetime of angst and regret.

However Fee is here to help in another way and the scene cuts to a large facility somewhere on the moon. Fee is mentioning how hard it was to get the visitors permits and that it was Gigalt’s idea.

At a huge set of doors they are met by Hakim, who is happy to help another student of the Gigalt School.

The doors open to reveal the enormous, and enormously powerful, Tandem Mirror fusion engine being built for the Von Braun.

This thing is a monster and you can see Hachimaki being impressed almost against his will.

There is magic in the moment when Hachimaki touches the mirror at one end of the engine. Well that and a whole lot of static electricity.

The next test sees Hachimaki confronting his personal demon again, only this time The Dream is strong again in Hachimaki. The hallucination retreats but warns Hachimaki to keep his guard up

A relieved Ai rushes in to embrace Hachimaki after the successful conclusion of the test, as Hachimaki promises to be ready to face his demons again next time. Significantly Hachimaki isn’t returning Ai’s embrace, he’s just standing there.

Ignition is one of the rare treatments of post traumatic stress in television, and handles the subject extremely well. This is one of the best character studies I’ve ever seen, and it cuts deep to the heart of Hachimaki’s self identity as an astronaut.

This is the test of will, of strength of character.

Although Hachimaki passes this test with the birth of a new dream, he will also draw some spectacularly wrong conclusions from it. These will come back to bite him later, and Hachimaki will face that hallucination at least once more.

That said, Ignition is an astonishing episode that works on almost every level. It is an impressively well scripted piece of television, and thoroughly recommended.

The storyboards that accompany this audio drama make it feel more like a deleted scene, one that might have made the finished product in a director’s cut. It is primarily a discussion between Fee and Yuri about who should be sent to the moon to check up on Hachimaki’s progress.

Fee initially wants to send Yuri as an EVA expert should be assessing whether Hachimaki is fit to resume work. Yuri argues for Ai; Spatial Loss Disorder is primarily a mental problem and Hachimaki needs support rather than assessment.

Fee is not yet convinced, partly because of the new relationship between Ai and Hachimaki. Yuri makes a perceptive comment about how much faith Fee has in her husband and son, and that this takes time to develop.

This is when Edel shows up with the paperwork for sending one female passenger to the moon. Edel is like the anime version of Radar from M.A.S.H sometimes, and Fee yields to the wisdom of those around her.

I really liked this audio drama, I think is the best of the set so far.

[1] I think that this makes the renewal of Ai’s EVA licence in In Her Case… something of a Chekhov’s Gun.

[2] Although the blue hand exerciser will still be short of the black one used by Harry Roland in Extraterrestrial Girl.

[3] Hachimaki’s dream of owning a spaceship was first seen in Like a Dream.

[4] This is implied rather than shown. I still wonder what price Nono ended up paying for effectively being caught sneaking out the surface when she wasn’t supposed to.