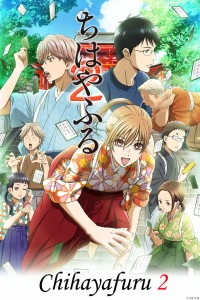 Chihayafuru is a surprisingly intense anime about the unusual, and quintessentially Japanese, card game or sport [1] of competitive karuta. There are some spoilers in this review.

Part of the attraction of Chihayafuru for me is the way the series calls a Steven Brust poem [2] to mind:

This was partly because Chihayafuru is so heavily invested in poetry, and partly because the poem matches Chihaya’s character arc through the first season.

As a 12 year old Ayase Chihaya was living her life with the vicarious dream of helping her sister become the best model in Japan. This is when she is introduced to the game of competitive karuta by a new classmate from another region.

The classmate also points out that Chihaya doesn’t have her own dream. This is partly what inspires Chihaya to a dream of her own: earning the title of Queen, the best female karuta player in Japan.

Back in the present day, the now 16 year old Chihaya is getting serious about Karuta, and is trying to qualify as A-Class in order to be eligible to challenge the current Queen.

Competitive Karuta is a combination of an intense memory game and snap played with cards drawn from the Ogura Hyakunin Isshu (generally subtitled on CrunchyRoll as the 100 Poets).

Selecting the matching card may be done with some force. Sometimes quite a lot of force is involved and the cards fly some distance.

Although Chihaya and her two childhood friends are the unquestionably the main characters in Chihayafuru, the supporting cast is well realised, surprisingly diverse, and more relevant than most.

The early part of the series is devoted to assembling the Karuta Club at Chihaya’s new high school. The Karuta Club is refreshingly diverse bunch, and a nice change from an endless stream of cute or beautiful characters. At three males, two females, the gender balance is reasonable.

The key though is that each character in the club approaches Karuta from a different angle: one loves the poems as poems, another uses statistical analysis of card placements, another relies on complete memorisation of positions, etc. These diverse approaches end up as critical to Chihaya’s own improvement as a Karuta player as they highlight her weaknesses.

The Karuta Club also fill a deep need in Chihaya. For various reasons Chihaya is deeply lonely, and this is well handled in the opening credits:

The Underdogs Never Lose…or do they?

One of the occasionally annoying tropes in sports/games media is the Underdogs Never Lose where the weaker player or team that the viewer is supposed to be cheering for never loses. For a recent example see Girls Und Panzer.

Chihayafuru doesn’t do this.

There are several episodes where Chihaya, or other characters, are facing significantly better players.

When this happens Chihaya usually gets hammered.

This could have been horribly frustrating to watch [3], but there was always a sense that Chihaya was learning from the defeats.

That Chihaya would, eventually, bounce back to achieve her dream because of the lessons learnt.

This doesn’t actually happen in the first season, but there is that sense that next year will be better.

Whatever else can be said for it, Chihayafuru can be an astonishingly pretty anime to watch. The design work is simply gorgeous, and the wide range of character designs supports the distinctive look.

There is a romantic subplot in Chihayafuru but it hasn’t been overdone and certainly doesn’t distract from the main game. The usual sort of fanservice is kept to an absolute minimum [4], and on a couple of occasions avoiding it is used to emphasise how generally uninterested in other parts of life Chihaya is.

Chihayafuru is not the sort of anime I expected to enjoy. It was recommended in a recent comment, and I’ve been surprised by how addictive this show has been. The writing has been consistently impressive, and the pacing generally fast.

My only real concern at this point is that the series has spent close to the maximum time it can in the Stagnation leads to failure; Failure leads to maturity section of the story arc.

A second season has just begun on CrunchyRoll, and I hope that we will start seeing Maturity leads to success soon. I don’t think that the failure arc can be successfully stretched into a third season, the frustration at Chihaya not improving would be too great.

That concern aside, Chihayafuru has been an surprisingly good show, and one that I happily recommend watching.

[1] Karuta is a card game, but competitive Karuta is also so physical that it really needs to be considered a sport.

[3] There are episodes where it is frustrating to watch since Chihaya is an easy character to sympathise with.

[4] However the type of fanservice dealing with Japanese traditional clothing gets a heavy workout, although this is much less problematic and implemented in an equal opportunity manner anyway.