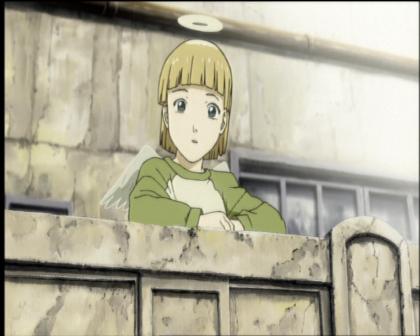 Kuu on the balcony at peace

Episode 6 of Haibane Renmei is one of conflicting moods. For Kuu it is one of completion, of serenity, of letting go. For the other Haibane, and for Rakka in particular, it is a dark time of loss.

NB: One oddity of the Australian [1] DVDs is that a few episodes, including this one, have additional scenes after the end credits. Chapter skipping the credits skips the extra scenes.

Fittingly for Rakka’s mood the episode is timed for the transition from summer to winter, and this transition also darkens the colour palette of the episode considerably.

The episode begins innocuously enough with Rakka looking for a room of her own. Her methodical search is not going well as too much of Old Home is uninhabitable. To me this search is a sign of Rakka settling in, of becoming comfortable with her existence as a Haibane.

Alas, that comfort is about to be yanked away.

Rakka sneezes, feels a chill, and looks up to see a cheerful Kuu on the balcony. The next scene has Kuu giving Rakka a winter coat which is a perfect size for Rakka. It was way too big for Kuu, which raises the question of why Kuu had it in the first place.

Kuu warns that winter is coming soon (alternatively that this is the end of summer), that it comes very suddenly, and that everyone gets a cold their first year. The discussion leads into why Rakka is seeking a new room rather than staying in the shared guest room – whilst Rakka is admiring the coat Kuu scribbles something on Rakka’s map.

Kuu leaves, and she is closing the door her halo… flickers.

As Reki is making breakfast [2] the bell from the clock tower begins to ring, and ring, and ring [3]. Kana’s efforts at repair have been partially successful. Alas she can’t stop the bell without stopping the clock entirely.

Kana then recognises the coat that Rakka is wearing, and is surprised that Kuu gave Rakka the first piece of clothing Kuu bought as a Haibane. Initially Kuu was always trying to copy the older Haibane, down to trying to wear the same size clothes. Kana is impressed that Kuu no longer has to pretend to be who she isn’t anymore, that Kuu has grown up in her own way.

On resuming her search Rakka finally notices Kuu’s addition to her map. Making her way there Rakka finds a much more inviting room. When she wonders aloud why it feels familiar Kuu steps in and tells Rakka that this was her Cocoon room. Kuu suggested it because Kuu also set herself up in her own Cocoon room.

As the sky darkens, and the wind begins to blow, Kuu’s halo flickers again. Before Rakka can speak Kuu starts talking about a beautiful cup [4] in her mind that is slowly filling drop by drop.

And today Kuu’s cup has become completely full, and thanks Rakka for some of the drops. Kuu runs off and Rakka is left standing, confused, in her new bedroom.

The sky continues to darken as a pensive Rakka returns to the guest room. Kuu didn’t say goodbye to Reki quite the same way, but did clean the kitchen.

Over tea Rakka asks Reki why the town is surrounded by walls. Reki’s answers a speculative but interrupted by lightning, a power failure, and the rain starts.

The crow that Rakka has been seeing before draws her attention to the Western Woods. As a result Rakka is watching when a beam of light ascends from the woods to the sky through the driving rain.

Reki goes to check on the Young Feathers and returns to the guest room to discover that Kuu is missing, while Kana is checking on a generator in the basement.

Rakka is standing at the entrance to Old Home when Reki catches up to her. Rakka finally tells Reki that Kuu was preparing for a journey to the Western Woods. Kana accidentally overhears this and is shocked.

Rakka then tells the tale of the birds, and of the beam of light.

This is where the grief of loss starts to play out with Kana angrily denying it. Reki finally mentions the Day of Flight.

Reki knows a legend of ancient ruins that a Haibane is drawn to on their Day of Flight to go beyond the walls. Reki also notes that it has been a fairly long time since the last Day of Flight so maybe the Haibane have forgotten that they could have to say goodbye to one of their own like this.

When they find the ruins near the wall Rakka finds Kuu’s halo as the last light from it dies, and it is now a ring of dull metal that her tears bounce of.

Rakka remembers Kuu’s words of thanks but it doesn’t help. The Haibane gather at a ruined temple to leave Kuu’s halo there, although Reki is off to one side. The final words before the end credits are Reki saying that in the end everybody leaves her.

The first scene is Rakka in her room still grieving, the second is part of the return to Old Home where the other Haibane try to get Rakka to stop crying by saying that this is a happy day for Kuu. Kana hopes that Kuu can hear the bells, and Hikari wishes for the bells to be Kuu’s guideposts on her day of flight.

This episode is so thoroughly constructed as a descent into darkness for Rakka that Kuu’s serenity and happiness feels off in retrospect. The way that changes to the weather, the darkening skies, the rising winds and rain work are carefully ratcheted up as the episode proceeds is devastatingly effective in setting the emotional tone of the episodes, possibly too much so.

When the Haibane find Kuu’s discarded halo, the weather breaks to a clear silent sky under a crescent moon. I think that this is intended to signal that Kuu is in a better place, and not to grieve too much.

Unfortunately whilst Nemu, Hikari, and to a lesser extent Kana can make this connection, the earlier hammering has essentially broken Rakka, and with it the viewer’s ability to do so as well.

Episode 6 ends the “Rakka settling in” arc and starts a much darker arc of Rakka facing her inner demons [7]. Overall I think it is a strong episode, but possibly a touch overdone.

[1] Presumably the American DVDs from which they were mastered have the same issue.

[2] Pancakes requested by Kuu, whose failure to show up for breakfast irritates Reki somewhat. J

[3] Chekhov’s Gun has now been loaded.

[5] Chekhov’s Gun has now been fired.

[6] Usually Haibane Renmei is more subtle than this, but 5 raincoats in mourning colours? Not to mention the endlessly tolling bell.

[7] And not doing so particularly well to begin with.